It probably isn’t actually marram grass, but one of the team said it looks like the stuff that grew near Saunton Sands when they were little, so marram grass it is!

It’s a really useful outdoor item, with a nice casual look - and also has the advantage of moving in the wind. As always, it’s UV fast, rain and frost-proof.

We have a couple of variations in green, plus a nice slightly warmer one with a bit of red at the base. Because the leaves are a little translucent, they also look different as the light changes, hence the variations in the pictures. Average height when planted in troughs or long runs is around 50cm, and we can raise the centre bit to about 80cm above the lip when it’s in individual pots.

The pictures here show it being used as single item (almost said ‘monoculture’,,,) but you’ll also find it in other pictures dotted around this site as part of mixed planting projects. 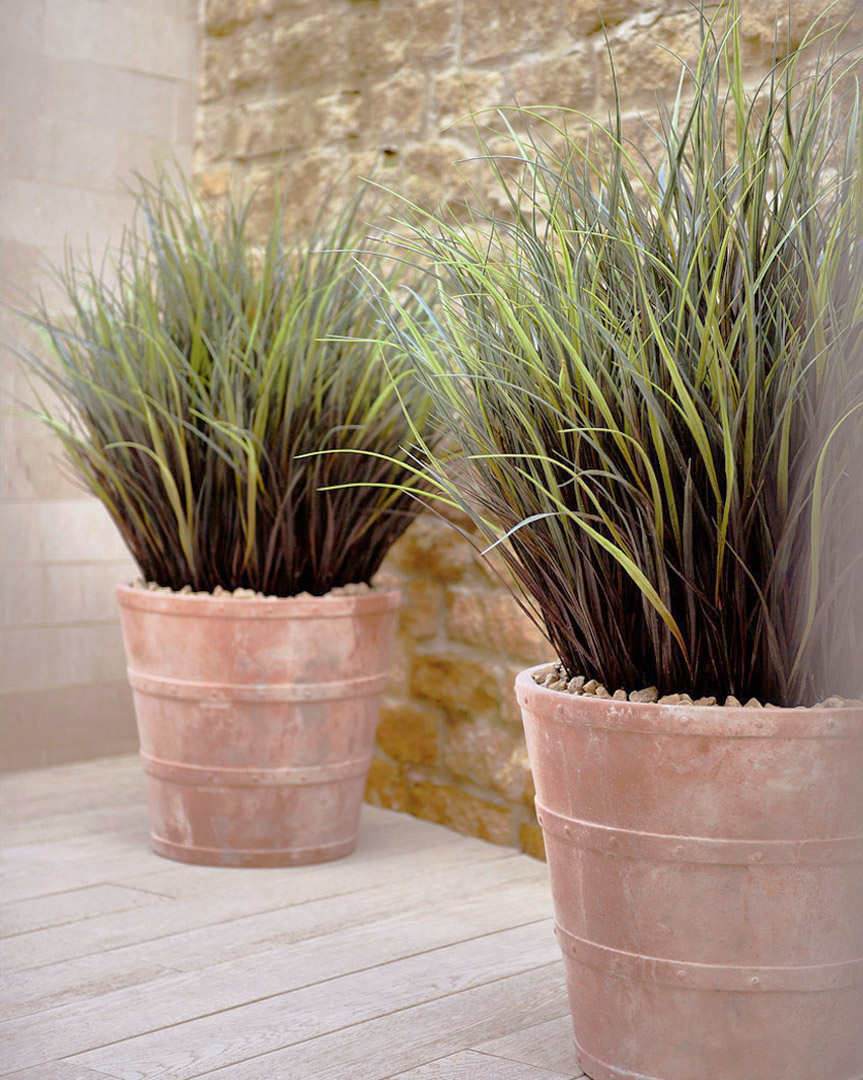 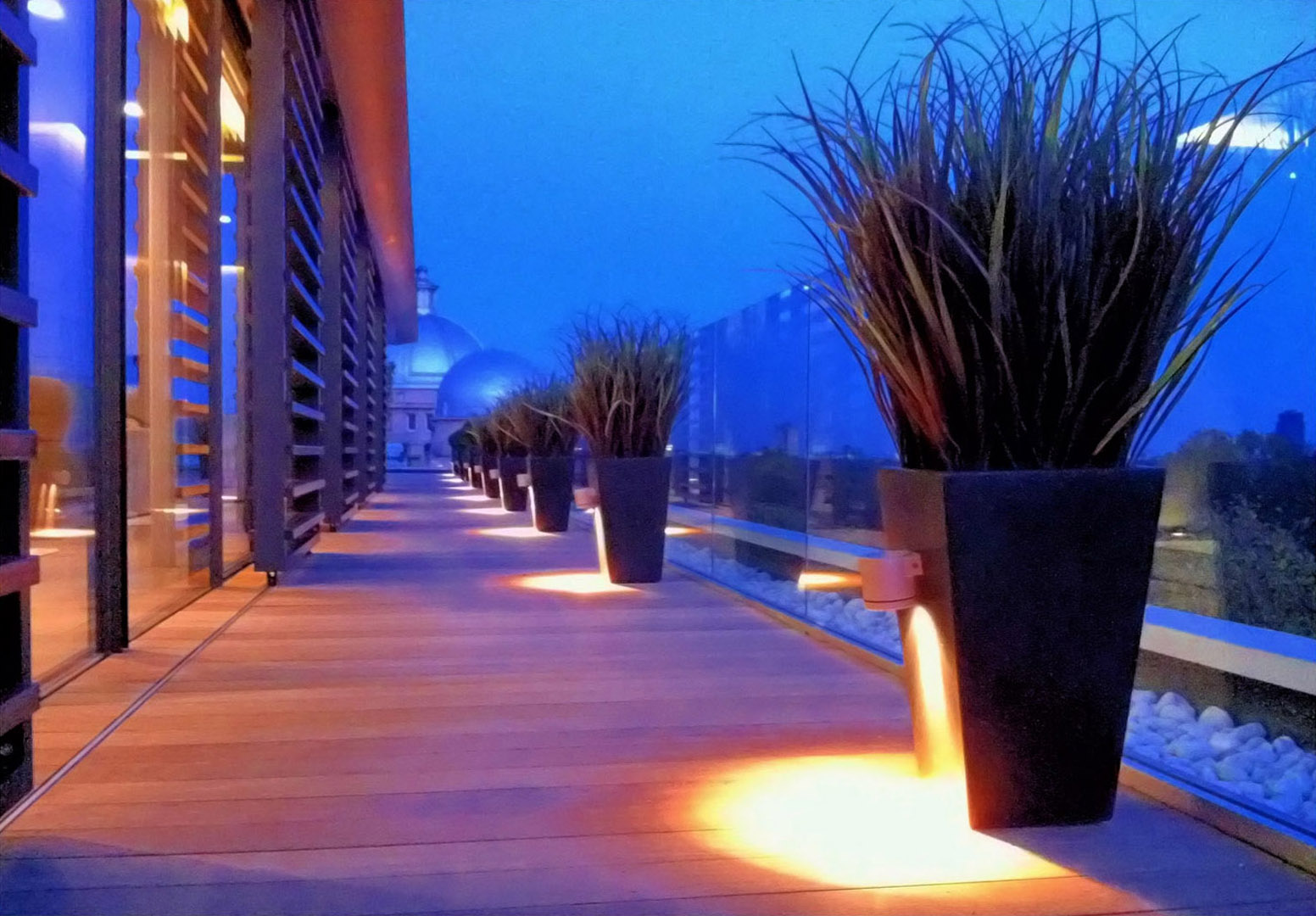 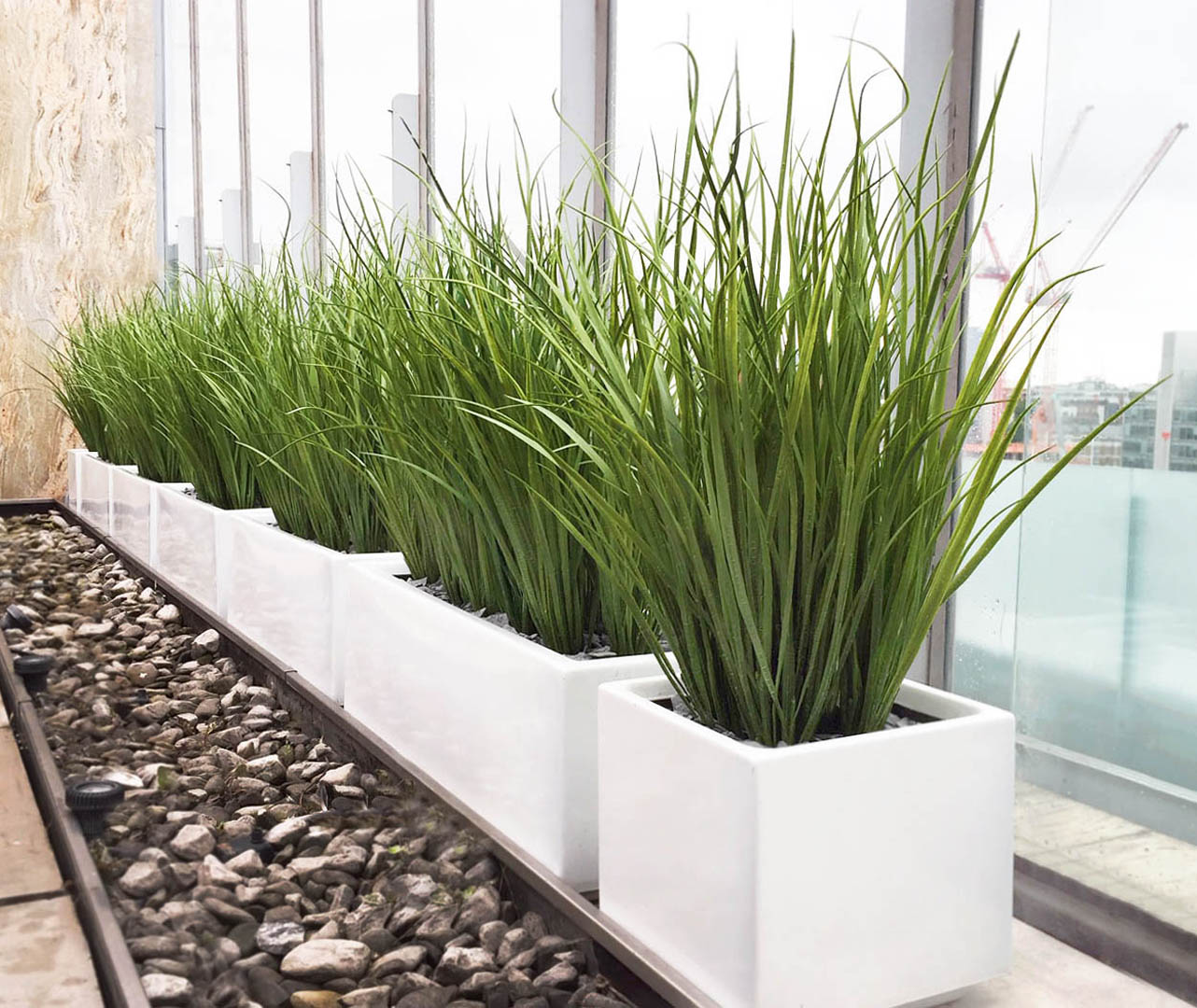 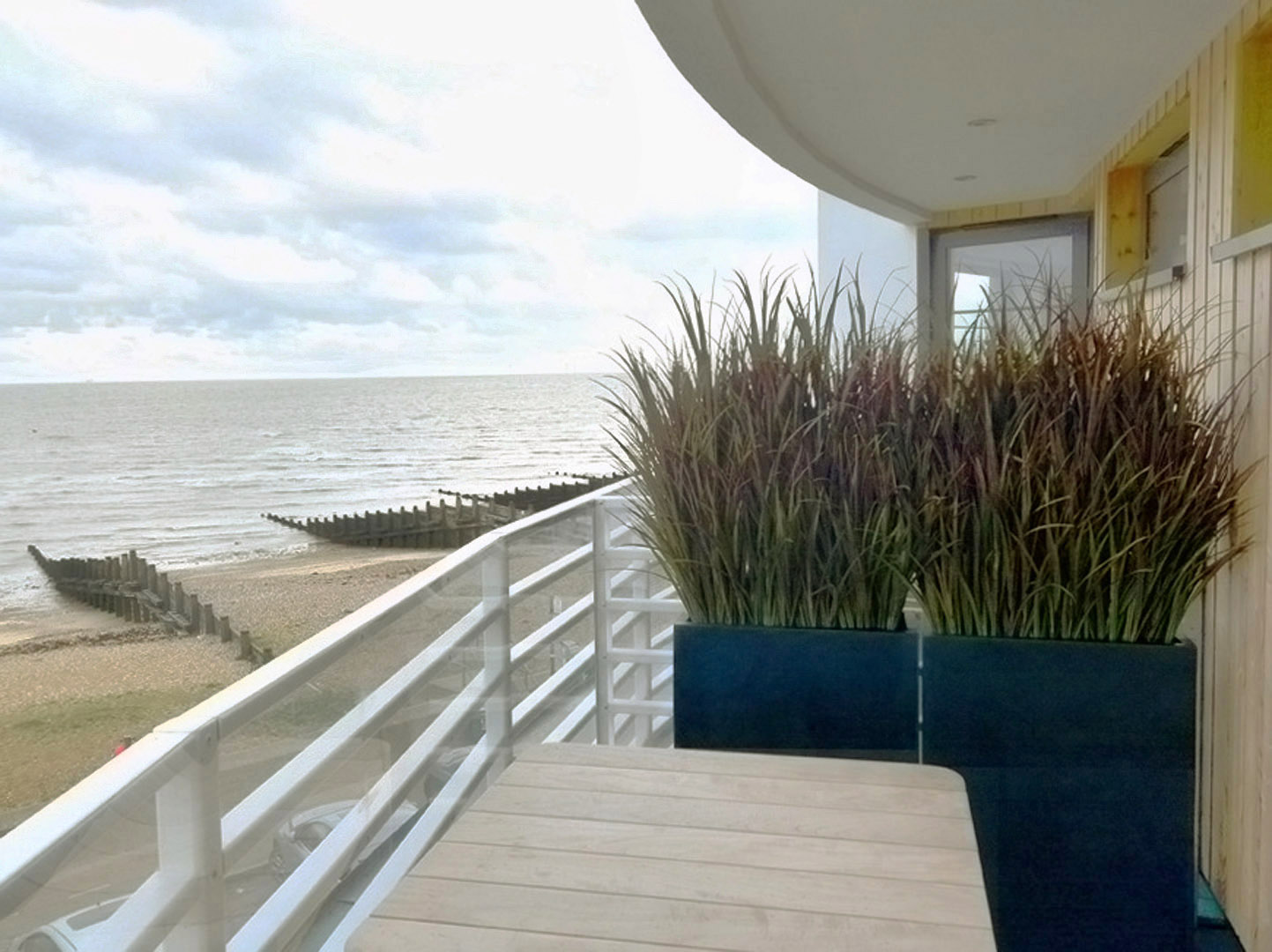 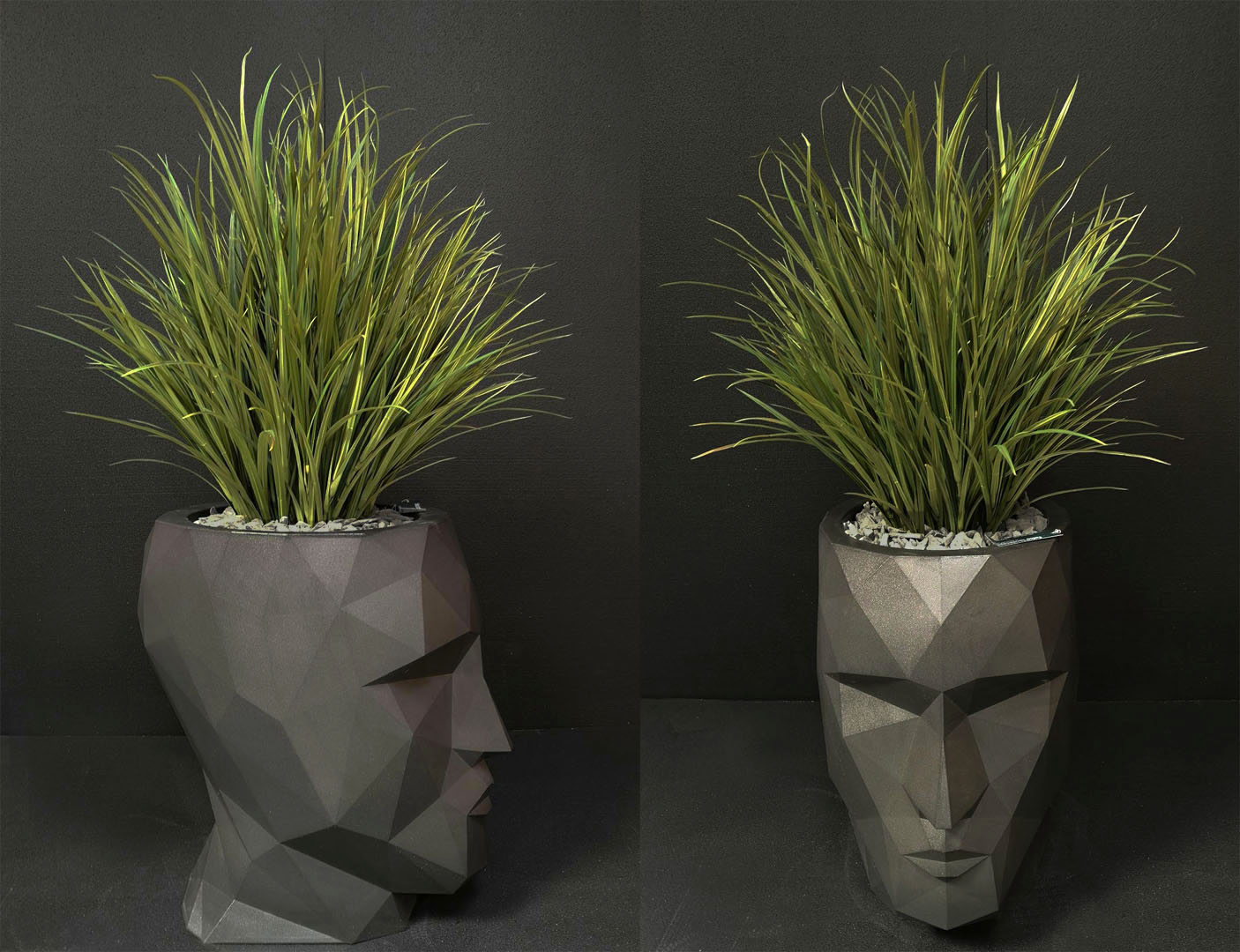 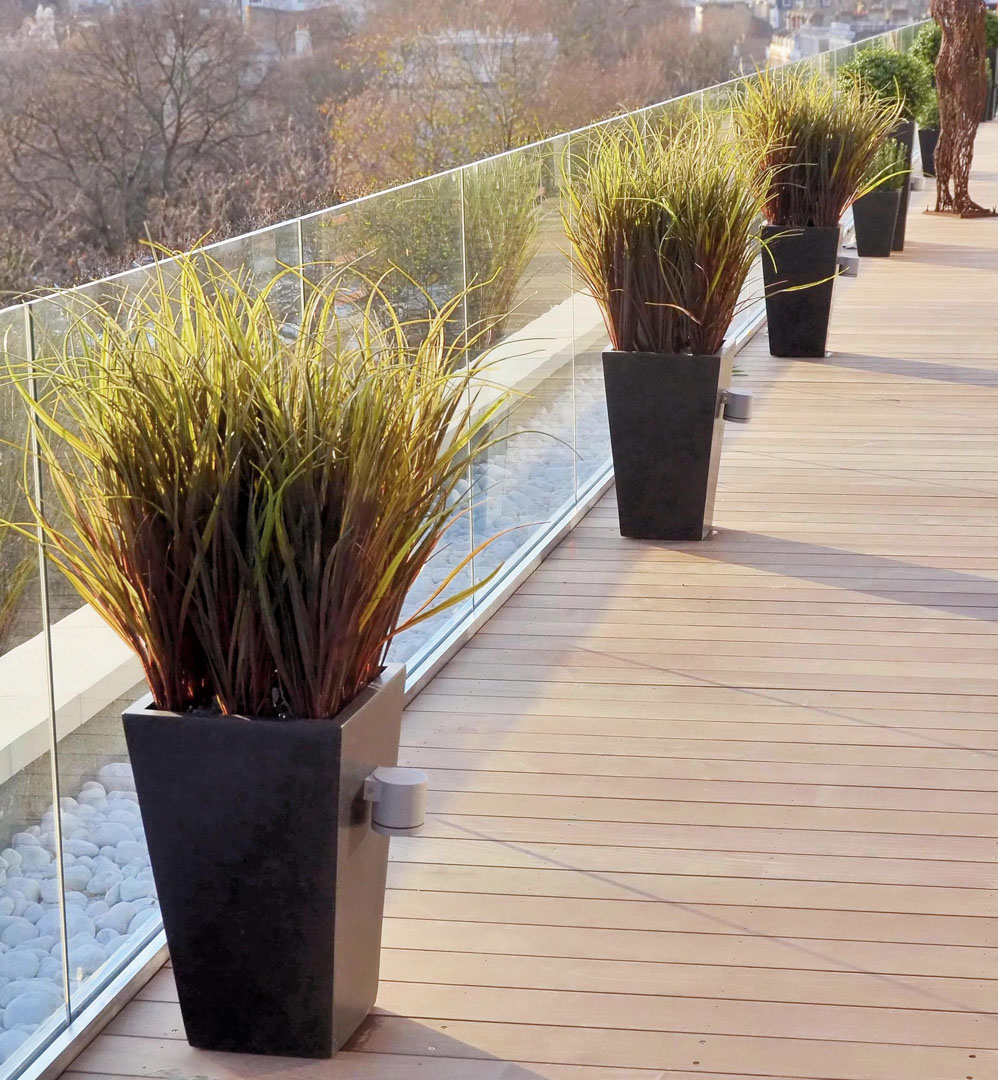 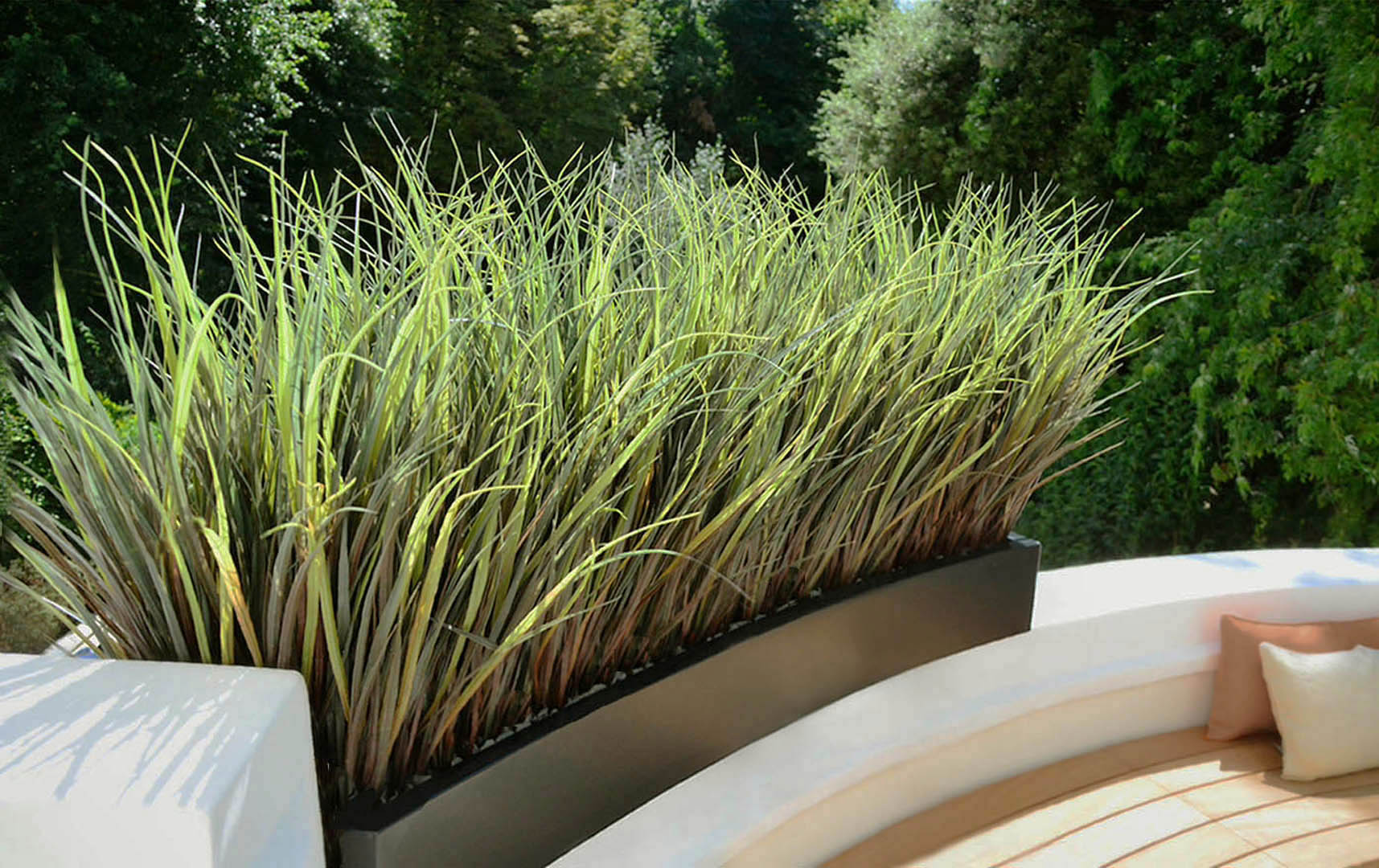 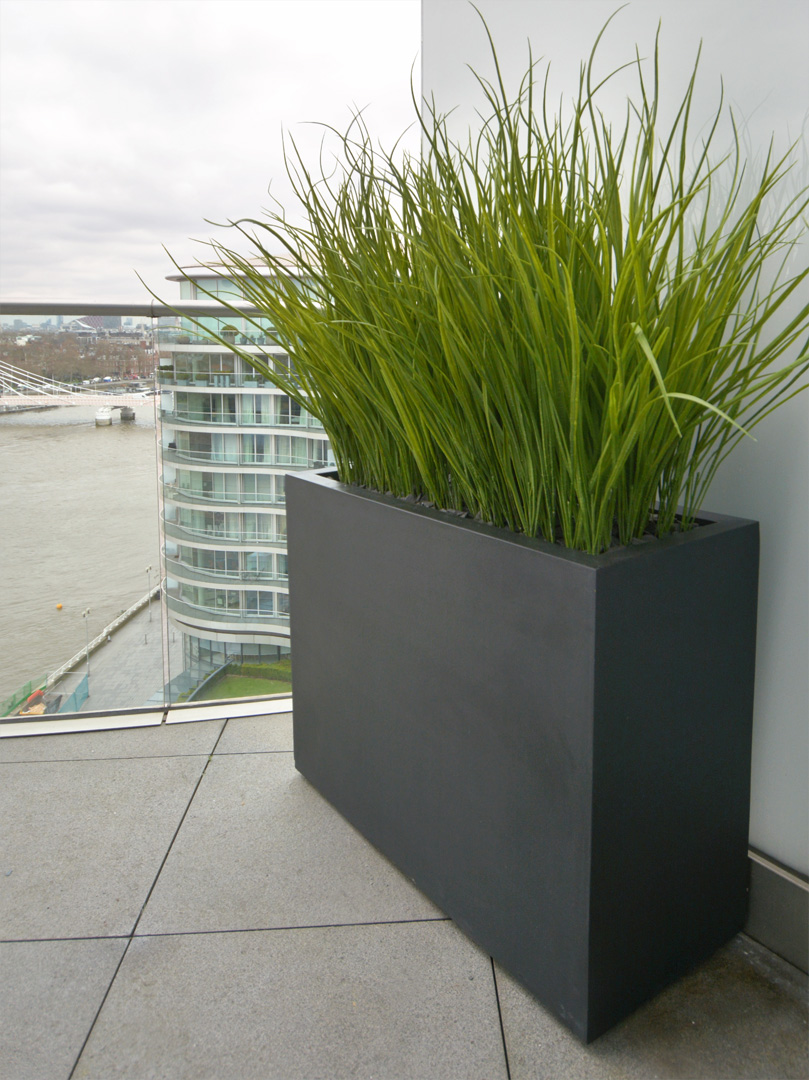 This is one of those dream jobs where they’d built a nice integrated wooden planter on the edge of the terrace, but without enough depth or drainage to keep real stuff alive! It’s in Notting Hill, and we were lucky with the light that day 540

We don’t see as much terracotta as we’d like – particularly with this dusty pink Italian tone. Against that, they probably cost more than the plants did! This is at a spa in the Cotswolds, not that it’s relevant - and we’ve made the middle grasses higher to get that domed top. 541

What’s neat about this (apart from the arty photo and that pretty dome in Bayswater in the background) is that the client had the lights drilled in to the planter sides, and the cables run through the side wall out of the base and into the decking. Real attention to detail! 542

This is a set of little 30cm glossy white cubes that belonged to the client. We don’t do much planting into white containers, but they work well with the fresh green marram. This is high up outside a hotel penthouse in Kings Cross with a less-than-enchanting view! 543

Here’s the russet marram grass being used in tall envelope planters to separate a balcony in a rather bleak Whitstable. It’s a very grainy picture and I don’t know why we focused on the horizon. Two out of ten for artistic interpretation… 544

No, me neither! These are workshop snaps with our new grey-green marram, when we check how things look before they go out. The eye forgives a lot but the camera doesn’t miss anything. What’s odd is that about a month after we did this, another weird head came in from someone else to have hydrangeas in it. Looked like a brain when completed! 545

This is the same Bayswater penthouse as the earlier night shot. I’d like to think the iron sculpture in the background is a Gormley, his stuff is lovely. It may just be a rusty bloke without strides on, though! Regardless, he goes nicely with the russet grass. 546

A curved steel planter to match the sweep of the stucco – very neat, and again a lot of attention to detail from designer and client. We had to cut the stems of all the marram as it was so shallow, took ages - which resulted in grumpy elves… 547

High up in Battersea somewhere on a grey day, another envelope planter with decent height to lose the neighbours. With frosted glass, apparently, it’s their shadows that are most disturbing! 548