Every year we do a number of pretty large projects.   Ones that involve a lot of plants and trees and require a fair bit of design time and planning - not to mention the logistics of building and getting things there.

More than half are overseas, so we've developed techniques to fit things neatly into 40’ containers and then re-assemble them like a ship in a bottle. We also pre-fabricate everything at our workshops so we minimise time and clutter onsite.

Some of these are hotels, some are private houses, some are residential developments and some are even yachts (one of which, notably, absorbed a six figure sum in flower arrangements!). A  good proportion of them can't be shown as the client - quite rightly - didn't want anything identifiable, but there are 'anonymised' parts of them dotted around the site.

A lot of them have as many items for the interior as the exterior, but that's almost impossible to show in pictures.  So this set just shows where, by chance, we could get a lot of the project (or at least a representative bit!) into one picture.

If you’ve got something like this in hand, just send over basic plans and visuals to start with.  We can then call you back and begin the conversation to see if it’s viable on both sides! 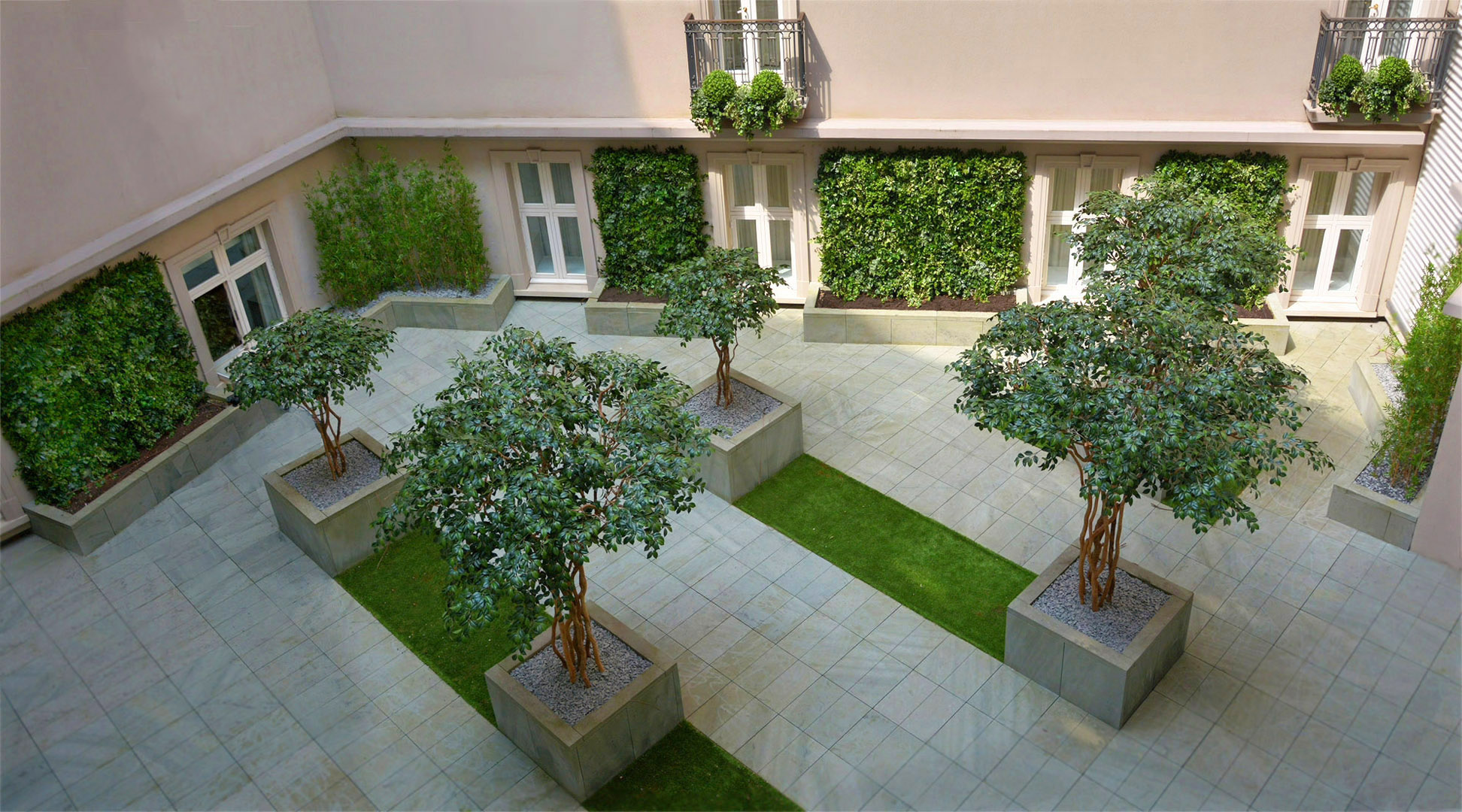 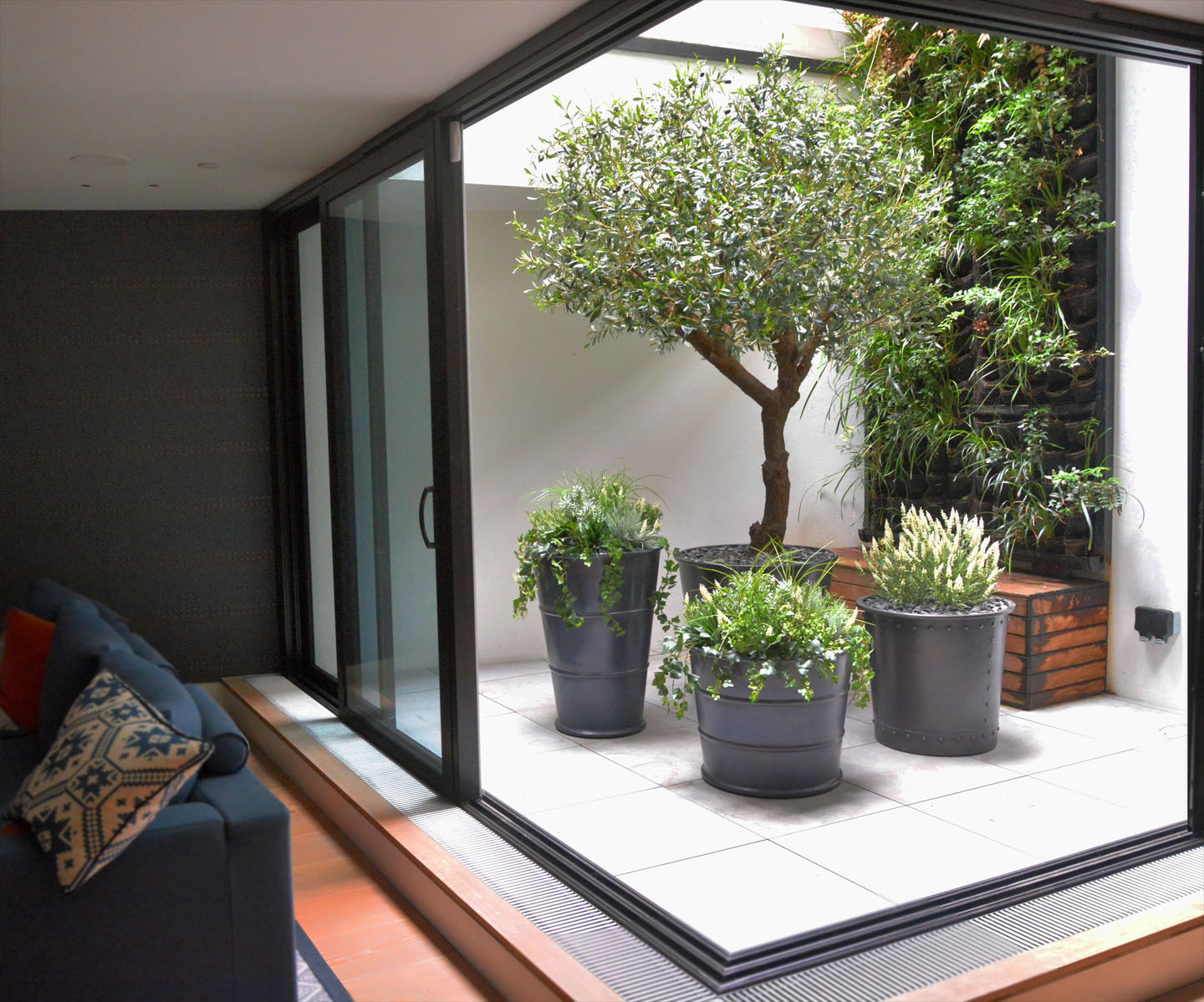 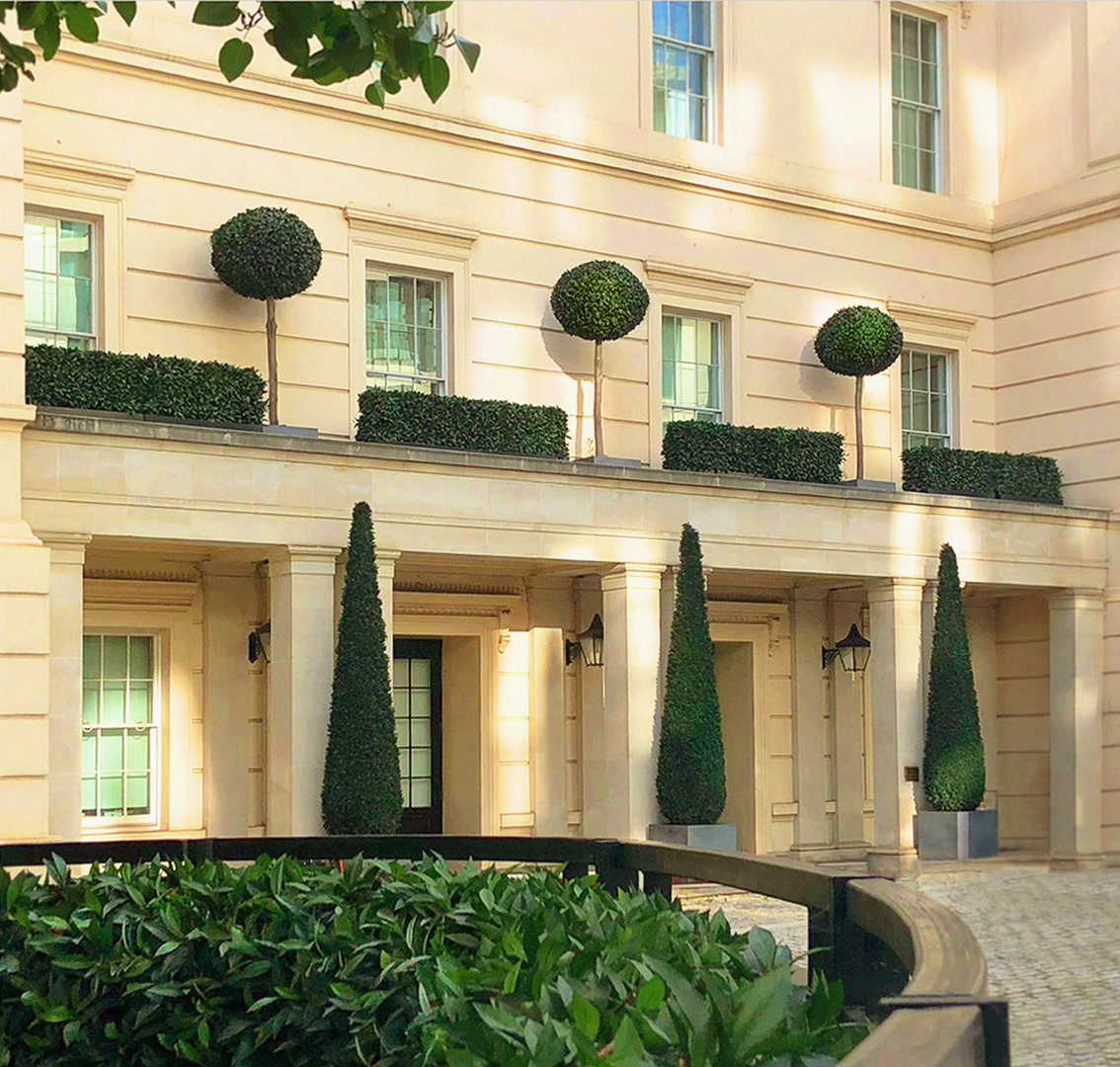 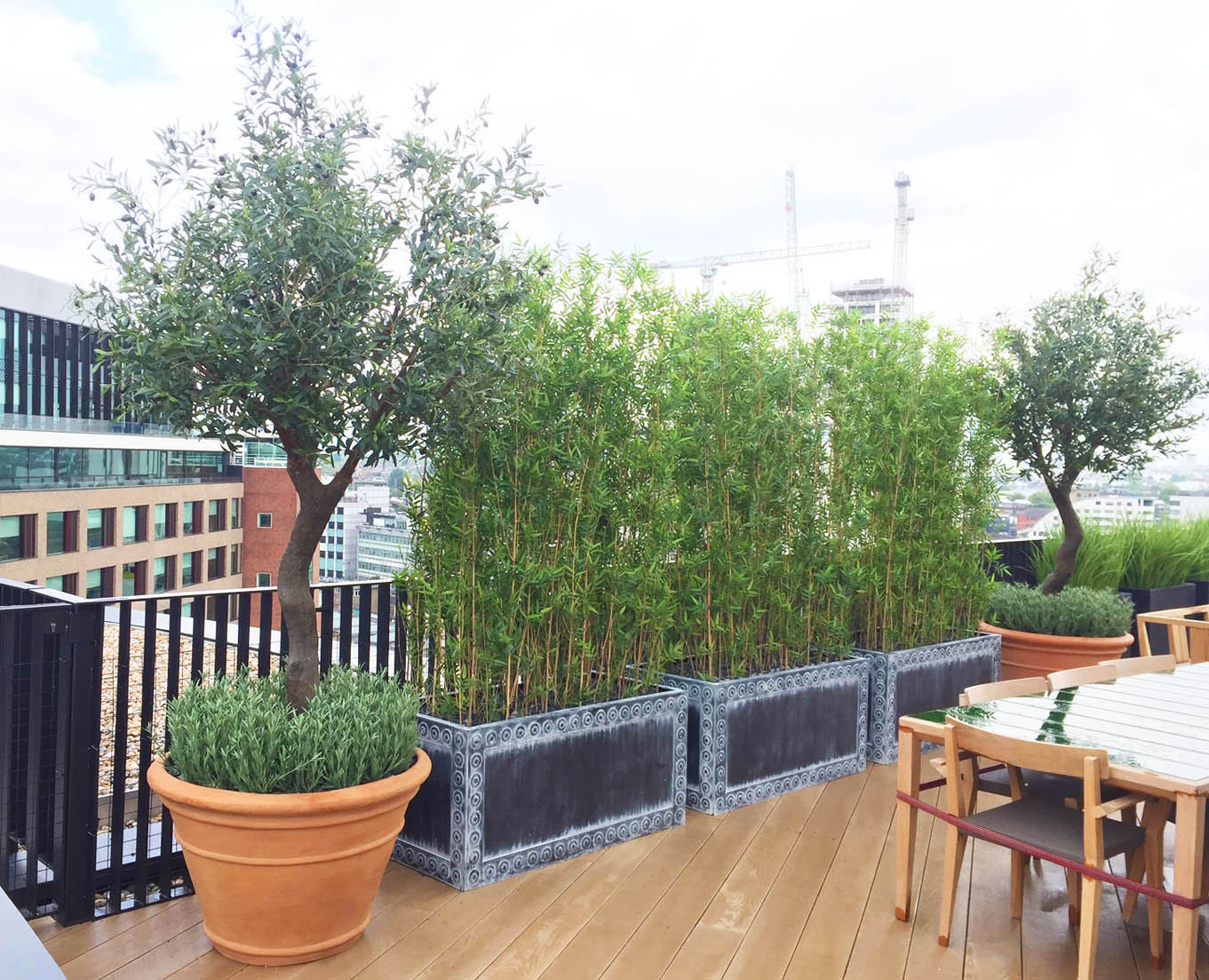 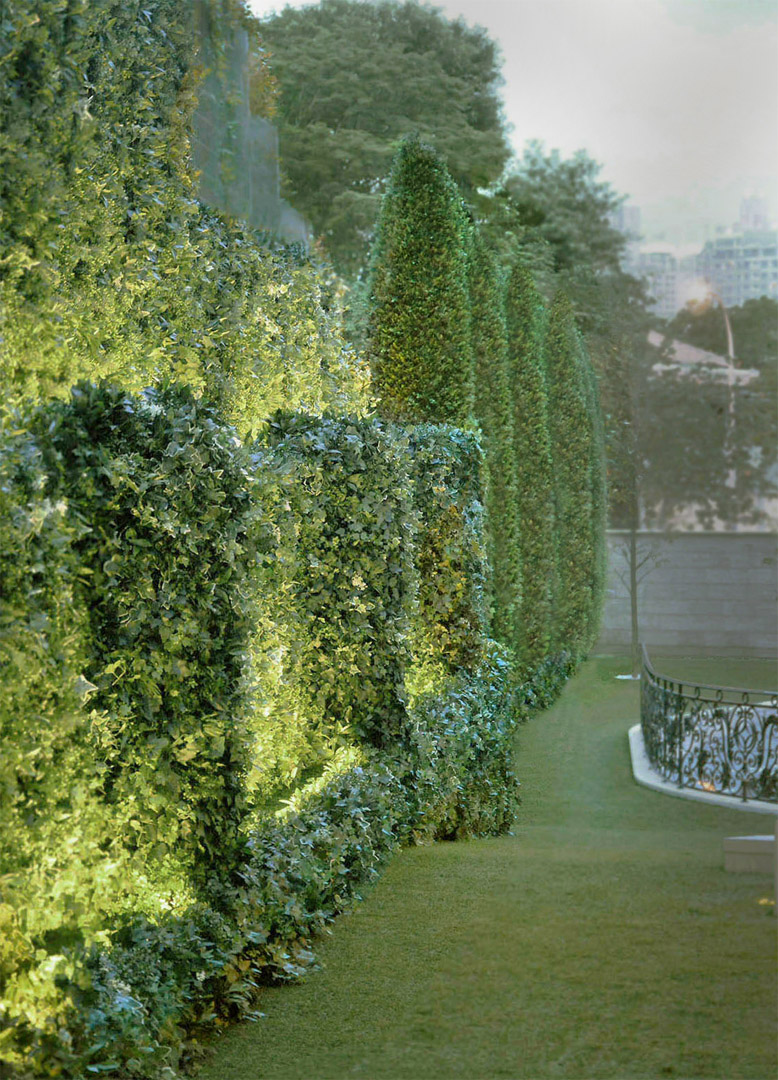 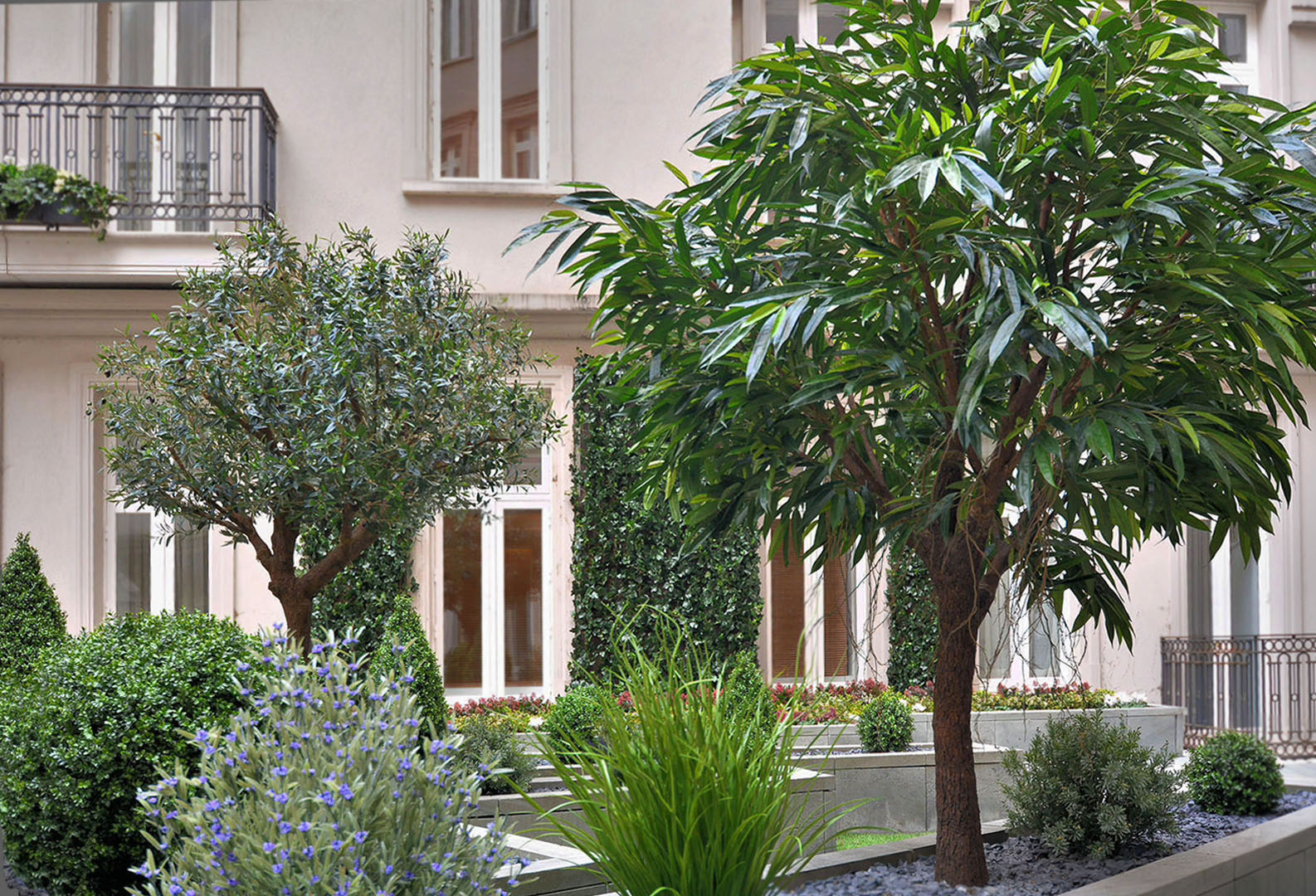 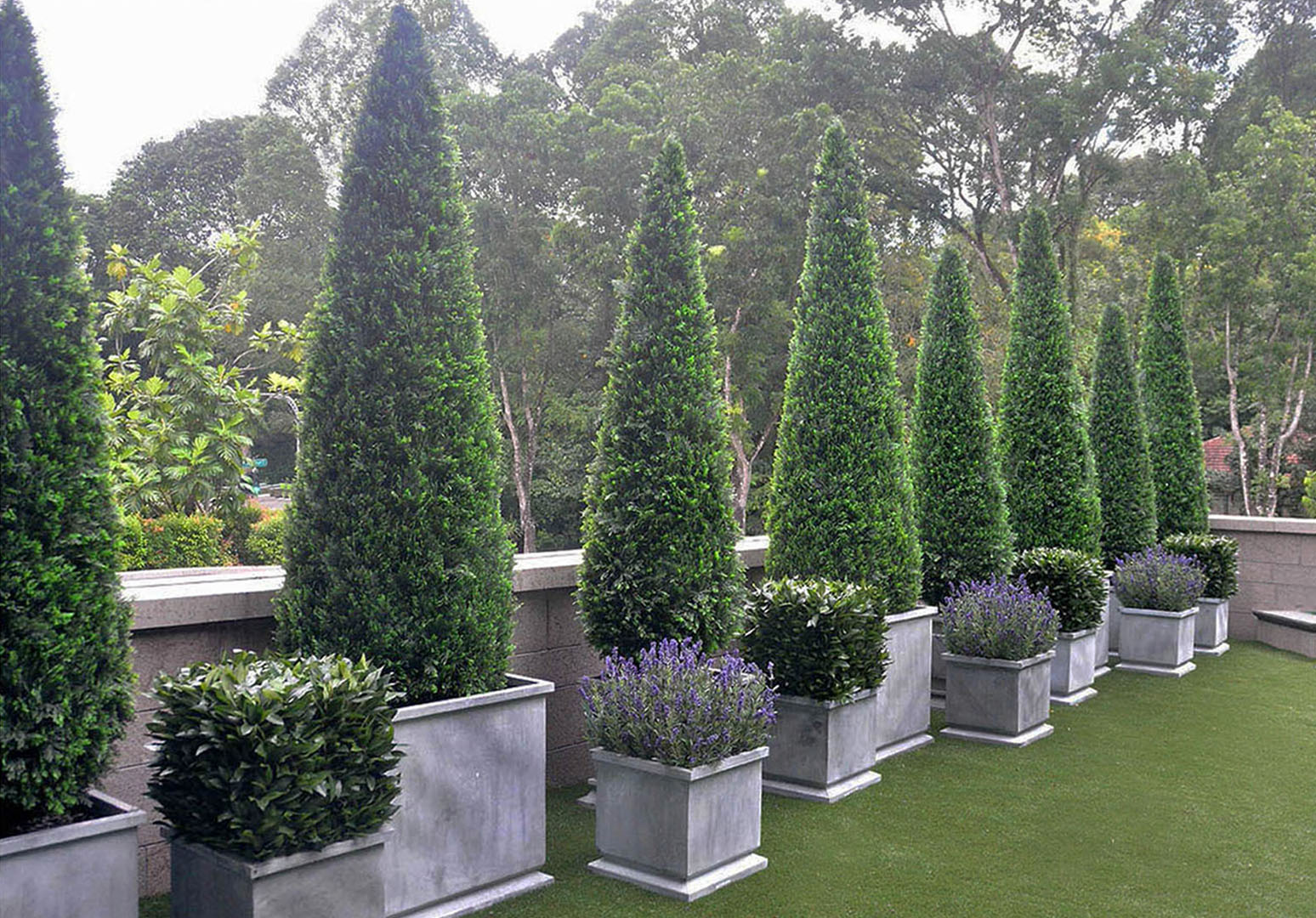 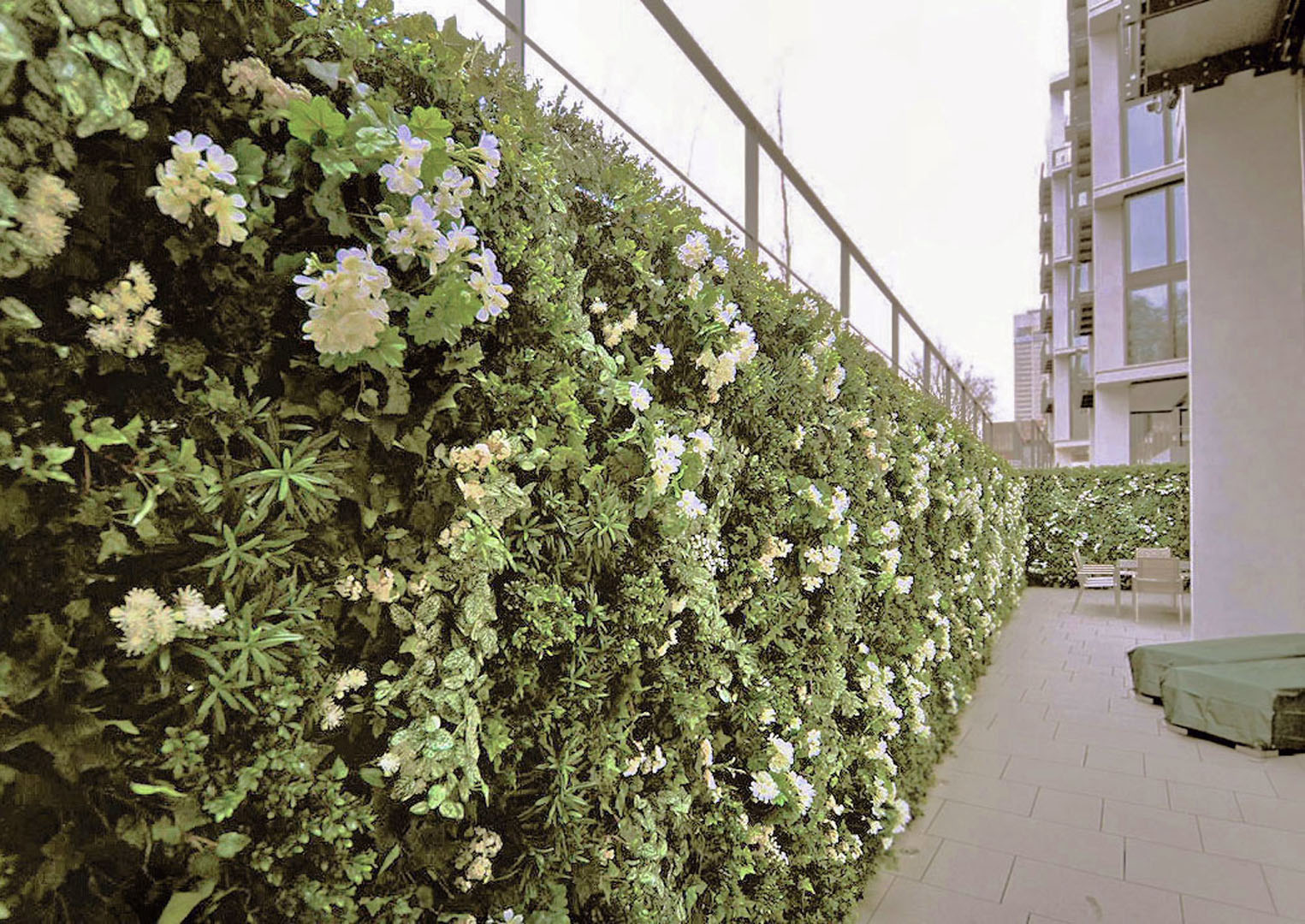 This is one of those large inner courtyards that you find in nice hotels in the middle of European cities, particularly in older buildings. They’re a bit sad in winter when you use live plants, so the plan here was to make it both year-round and more ‘3D’ with some 3-5m camellia trees, living walls and bamboo groves. The earth in front of the living walls is so that seasonal flowers can be planted to give the best of both worlds. 410

One of a series of lightwells in a modern apartment building that are open to the elements, where we’ve made groups of trees and underplanting in various sizes to fit the space. That’s a live (ish…) living wall in the background and the stylish planters are from the nice people at Bronzino. 411

This picture of the Lanesborough hotel is also in the cypress section of the site, and is really the tip of the iceberg, in that the inner courtyards and upper balconies are also planted with a mix of our topiaries. We’ve actually done the landscaping there a couple of times now, six or seven years apart, so we must be doing something right! 412

Part of a mixed project over at the old BBC television centre in Shepherd’s Bush, which is particularly windy. That’s true of a lot of buildings around there out by Westway and also in Docklands, and we’d normally suggest a screening hedge. It does look nice, though!! 413

Part of a humungous living wall, more than 250m2 in area, and, just for good measure, several runs of 5m tall cypress trees to boot! That’s a lot of 40’ shipping containers, and it’s probably the largest private house project we’ve done. The lighting is well planned here, lots of 2700k LEDs which were in place before we arrived, so we could fit around them to avoid glare. 414

The central courtyard at the Corinthia Hotel in London, with long raised planters, a mix of UV olive and alii trees for height, and some nicely random under-planting. Plus green walls with live flowers below, as before. 415

Part of a really nice formal garden in Singapore, with small alternating variations in the tree heights to make it look more natural, there are other parts of the same project dotted around the site, the planters are the give-away! 416

Another huge living wall, over 200m2, with a higher than usual proportion of white UV geraniums. Although it ‘belongs’ to one apartment, it’s visible from others at a distance, hence the need for extra texture. The odd colours are because the picture was taken in near darkness… 417

Here’s a fun oddity – this is Ascot racecourse, and there are some nice pictures elsewhere on the site of the high level interior planting. But the tiny little green dots that the arrow is pointing out are actually a set of 100cm buxus balls and teardrops - they look great from the inside but are just a little dwarfed by the building here! 418 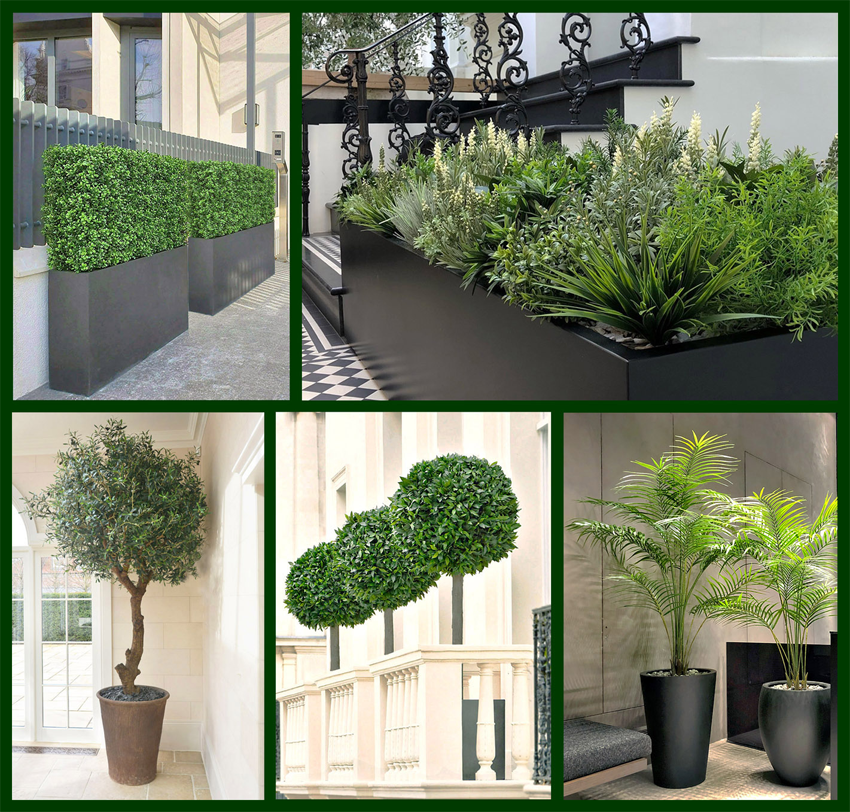 No need for an appointment, just pop in when it suits!